It's All in the Numbers

This weekend, I want to do something a bit of a departure. I don't want to write a new game, or campaign, or really anything gamey for the blog.. I want to address my other geekly passion, Comics. Yes, I know, I already did a treatise in my Speak Out With Your Geek Out post, but this is something different. If you use your wayback machine to scour my earliest posts, I mention that I will be doing reviews.. and that will start this week with my words about the DC Reboot.

And no, I'm not a Johnny-come-lately. I don't think you can really evaluate something as broad as DC's reboot during the run of issue 1's. However, this week marks the appearance of the first Issue 3's, so it's high time for me to give a more educated evaluation. 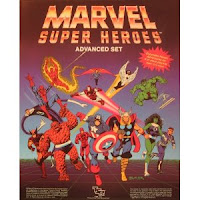 This led me to try to decide on something suitable for keeping score. So..... I decided to go back.. and I mean WAAAYYY back in my geekdom to the second RPG I ever played: Marvel Super Heroes from TSR (or as it is sometimes affectionately known: Marvel FASERIP- a reference to the character traits).  From what I remember, before I made my first character for Marvel (a badass Punisher-type with a badge, hands that could disintegrate metal, and a tail called the Enforcer- hey, it was the '80's), i got to play the all-american shield slinging boyscout himself, Captain America. I don't think I have a single bad memory of this game and it was one of the first games I was brave enough to step across the table from player to gamemaster in... but I digress. 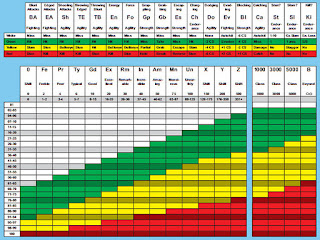 Marvel Super Heroes had a chart on the back of the book that detailed the level of your traits numerically across the top in relation to other ability scores from Shift Zero and Feeble on the low side, through the Remarkable and Amazing, all the way up to Class 1000, 3000, 5000, and Beyond (for those things so great they couldn't be measured). On the left side of the chart, it showed the number of your dice roll. You compared your dice roll to the ability you were using (Amazing Strength or Monstrous Intelligence, etc) and hoped you rolled high enough to get in the green, yellow, or red bars.

For my purposes, I won't need nearly so many categories. I think I can cut it off at Class 1000 and still have a lot of leeway here. And of course, there's no need for the full chart since we aren't exactly creating characters here, so I can cut out the dice and the chart as a whole. So, my rating system will look more like this:

That being said, it means I will give a numerical score somewhere between 0 (for the REALLY GODAWFUL) and 1000 (for the "slit your wrists because now you can die it's that good"). There's also a little space there. I may give one item a rating of 35 and another 38. Both are REMARKABLE, but I think one is a little better than the other. Generally, I would recommend avoiding anything from Shift 0 to Poor; I feel kinda "Meh" about things Typical and Good, I might spend money up to Remarkable, but beyond that we get into like, love and geeking out.

Hope this makes sense... I guess we'll see this weekend...