Tell Me About Your Character: Ep.4- Tell me lies. Tell me sweet little lies.

Your reality, sir, is lies and balderdash and I'm delighted to say that I have no grasp of it whatsoever.

I tire of explaining things in such a mundane fashion. So, I will allow my followers from Geek and Sundry to explain the good Baron's "Game" with their customary lack of ingenuity and class.

The rules are relatively minimal. The first player prompts the player on their left to regale them with a story of their choosing. This could be anything such as, “Tell us about the time you fended off that invading Mongolian horde with a banana” or “How precisely did you woo Catherine the Great and bring about the age of Russian Enlightenment?” From there, the challenged player begins telling the story with as much detail as possible. The other players may attempt to interrupt, distract, and prove the story false by wagering tokens. “But how could that be true if Genghis Khan had already seized all the bananas in eastern Asia?” The storyteller must then counter the argument with their own token, offering an explanation as to why their story is completely true or an excuse as to why that detail does not fit. Players can argue back and forth until one concedes. Once each player has told their story, all the players use their tokens to select their favorite tale.

You've heard of me- or at least my story, you just do not know it yet. Your friend, the blogger, has asked me to fill in to tell you my story in his plain, uninteresting dialect.

I am the second son of the King of West Asia, born far from here in Tycho City, Luna in exile of my homelands. Most of my life was spent sailing the phlogston seas of space and time, having adventures and romantic interludes with the finest lovers and most gallant combatants the ages could have ever produced. Still none have been my equal at sword, treaty, dice, or love. And to this day, hundreds seek my counsel in nearly every matter.

Come to my table and I will merrily tell you a tale. It will only cost you the time and coin to refill my goblet and the pleasure of your company. I need not promise, for it remains fact, that my company is always a pleasure.

The Extraordinary Adventures of Baron Munchausen
By Fantasy Flight Games 2017

I do not feel that I have a need to wax philosophical on how the Baron's game came to its Third Printing with the simple plebs of Fantasy Flight. I will say that it greatly improves on previous editions from the likes of Mongoose Publishing by simply adding more words.

Yes, those words highlight new ways to play the "game" with a dozen new variations. They are far from the thirty nine variations the Baron approached me to help him create, but it seems that books can only hold so much information and the publishers were afraid that if we kept my additions, the books would invariably break their bindings and the sheer knowledge that could have been gained would be lost forever. Ah, what a day it might have been to see those words etched forever in paper and ink...

It should be apparent to you that the good Baron consulted me time and again on the creation of his game. He claimed he wanted only to tell the most fantastical tales based on my own exploits, but I suggested he change the focus to others trying to keep up with the truths of my wondrous life.

Wait. Hold. I need to have my goblet refilled. This form of retelling makes one quite thirsty.

Ah, excellent. The Red Queen of the Martian Steppes personally supplied me with this vintage of helioberry wine from the stores of the Jeddak. There is no finer drink of the vine.

Back to the Baron's game. It was nearly thirty years ago that, hat in hand, the Baron approached me gentleman to gentleman and bade me tell him the tales of my exploits throughout the cosmos. As a nobleman, I could hardly dismiss the request of a fellow patrician. So it was surprising, even to me, to see the Baron's eyes wide in recognition of the tales he had heard- far more poorly- detailed before him.

Even from my boyhood adventures at the side of the King of Carolina, my claim to the Shah of Highsand's harem, and my third marriage to the current Queen of West Asia, my tales had spread from dance hall, to tavern; from pauper's pit to royal hall. However, it seems that my tales were so legendary, so influential that others- ne'erdowells and vagabonds, I expect- had dared to lay claim to my story as their own.

And thus, I explained to the good Baron, that he could find his game within. Oh sure, the publisher made the poor decision to not utilize my good name to sell more volumes, but I expect it was fear of my legal wrath if tempted that kept their hand from the affront.

No matter, it is a rare day that I cannot rule the day at the Baron's game, much like any other such idle pastime, simply by telling the amazing truths of the years that have preceded this one in my astonishing life story.

One day, you should see for yourself. But for now, I must call upon the maitre d' to refill my goblet once again.

A note from Joe: The running list of characters can be found here. If you have any other ideas for games not on that list, or know what you'd like me to dive into next, drop me a line.
~Joe

Email ThisBlogThis!Share to TwitterShare to FacebookShare to Pinterest
Labels: Fantasy Flight Games, Tell Me About Your Character, The Extraordinary Adventures of Baron Munchausen 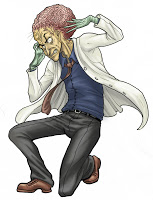 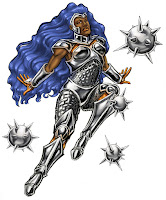