A Goodbye to Anne 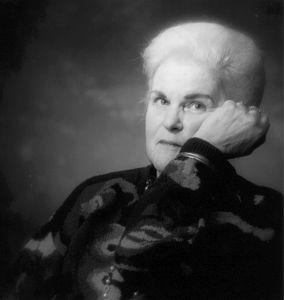 When I was twelve, My father, an avid reader of all things sci-fi and fantasy, was convinced I would want to move on from my normal Battletech novels and non Arthur Conan Doyle written Conan books into more substantial works. He handed me a book written by an author I'd never heard of named Anne McCaffrey called Dragonflight.

"This is the start of something much larger," he warned. "The Dragonriders of Pern is not a series to be undertaken lightly."

My heart lept into my throat. Dragonriders? People that actually rode dragons? Even Conan didn't ride dragons! Even with the wide-eyed wonder of a twelve year old imagination, I was not prepared in the least for the ride Ms. McCaffrey was about to carry me on. 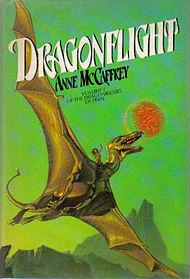 On the surface, (and spoilers for anyone who hasn't read this 45 year old series) Dragonriders of Pern seems like a typical fantasy series With fire-breathing dragons with a psychic bond to their riders defending the world against a creature called simply Thread, a mindless omnivore that devours everything it touches. Lacking the usual fantasy tropes common to sword and sorcery, the Dragonriders of Pern was lush with political intrigue, supernatural abilities like teleportation and time travel, and an author that excelled at internal monologues and the ability to characterize even minor characters so well, it was impossible to not believe each and every character was a real person. The series wasn't bloody or war driven like I was used to, but better because of it. And then the twist, Dragonriders of Pern was never a fantasy, it was a science fiction series window dressed as fantasy but supported by science. Brilliant. My adolescent mind exploded with delight with each word that dripped into my brain from those hallowed pages.

From the day I finished Dragonflight (the first book published in the series, but not the first chronologically), I was a fan. Big time. I absorbed everything I could of the Pern books, from the novels, to the short stories; from the reference books like A Dragonlover's Guide to Pern a and Karen Wynn Fonstadt's Atlas of Pern to the hard to find Choose Your Own Adventure Pern Books. And soon after, I needed to read Ms. McCaffrey's other works: The Ship Who Sang, Restoree, The Crystal Singer books, etc, etc. I loved them all. Anne excelled at her characterization and relished in the fact that women could be heroes too- a fact that was sorely missed in most fantasy and sci-fi before her. The genre is better because of it. Her words could evoke emotions that I could rarely see in any other writer- in fact, I challenge anyone to read The Ship Who Sang and not cry at the end.

It was reading Anne McCaffrey's works, big and small, that made me want to write. I didn't care if I wrote stories or textbooks, all I knew was that of all my artistic pursuits -guitar, illustration, singing, painting- putting the written word to print or computer screen would be the one I loved the most. As if to exemplify this fact, I spent my early twenties building my writing chops as part of a writing group that wrote solely our own Pern fiction in our own "Alternate 12th Pass". And of course, I spent these years re-reading the Dragonriders of Pern series that was (and is) still my favorite, except by the 30th reading I'd mastered reading the novels in chronological order yet still discover new nuances with every chapter.

Once I became a regular in the convention circuit, I learned that Ms. McCaffrey frequented the large and notorious Atlanta science fiction convention known as Dragon*Con. Dragon*Con is arguably the largest science fiction convention in the United States and many of my closest friends and industry contacts frequent the convention every year, as did Anne. I promised myself I would make the trip to Atlanta for no other reason than to meet her- oh sure, there are plenty of fantastic guests every year, but she was first and foremost on my list. I wanted to thank her for enriching my childhood, sparking my imagination, and more than anything I wanted to thank her for the gift she gave me in my love of writing. But I never made it.

On November 21st, 2011, Anne McCaffrey passed away from a massive stroke in her home, Dragonhold, in the hills of County Wicklow, Ireland. When I found out, I was stunned, but I contacted all my old friends from our Pern writing days immediately. One of them commented that she had "gone between". I like that.  For all my words, I don't have them to express what I feel about the loss of someone so amazing, so I will let Anne's own words do it for me.

From All The Weyrs of Pern:

All the Weyrs of Pern hovered in the sky, and while fire-lizards made sad swirls around them the ship sailed out of Cove Hold. Lord Holders and Craftmasters lined the decks amid harpers of every degree.
Sebell and Menolly sang all the songs that had made the Masterharper so beloved by everyone, Menolly remembering the day that she had sung farewell to his father, Petiron, the day that had begun the major change in her own life.
And as the ship moved into the Current, scores of shipfish led the way, slipping, diving, gliding, and weaving among the ships' bow waves.
When his body was consigned to the sea, the dragons bugled one last note for Masterharper Robinton. 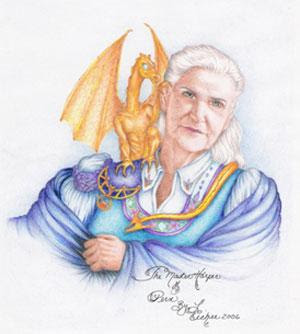 Thank you Anne. We will all miss you.