Okay, so this is a weird one.

A couple weeks ago, I was working on a new assignment for Paizo (nope, can't talk about it until it's announced). As I was working on it, I had to follow my process to get in the right state of mind for writing.

For me, the pre-game is a two-step process. 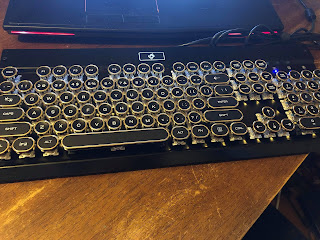 Okay, this is old news, but a couple years ago I put together a keyboard to fill my tactile needs. I like the click-clack of Cherry MX blue switches, and while terrible for gaming, my keyboard (aka Fairlight Excalibur) is perfect for my writing needs.

For those that don't know, Cherry MX Blue is a type of switch (the apparatus beneath each actual key) that not only supplies the signal for each key depression, but adds a certain amount of bounce and tension to each keystroke. Different switches in the Cherry MX family offer different levels of tension and each feels different when stroked. The blue is fairly bouncy, but not as stiff as green or white switches.

What makes blue switches stand out is that the plunger is in two parts- the blue plunger which is attached to the key above, and a white slider that actually completes the circuit. To some degree, the white slider moves independently, but it is pushed down or drawn up by the plunger. When the slider is fully depressed against the switch housing, it makes an audible "click." The result? An experience that affects both touch and hearing.  As such, for a long time- this element of my necessities to get into the right zone has been met.

Step two is specific to each project. For most of my life, I've had a mild auditory hallucination, sometimes referred to as musical tinnitus. Since I have actual tinnitus from years of performing live music without ear protection, this makes me extra special. But seriously, this basically means that a part of my brain is constantly hearing music. I don't have any cancerous growths or symptoms of Alzheimer's, nor have I been on any medication or drugs that could cause such a malady- I simply always hear music. I sometimes jokingly call it WJOE radio.

When I was younger and in bands, this was easy to remedy- I'd simply put myself to writing music and like magic the songs in my head would change to focus on what I was writing. Mind you, I am not now, nor have I ever been, a good songwriter- and a lot of what I have done is fairly derivative. But I blame my internal musical muse for that. I've also found that listening to music seems to sate that part of my brain (thank the Gods Below that I grew up in an age with the walkman and the products it spawned). To some degree, any time I needed to concentrate, I've required musical accompaniment. And this has transferred more specifically to my writing than any other part of my life.

So yes, Fearless Reader, if you have read more than a dozen words of mine strung together, it was written to music. This has a greater effect on individual projects than I would have expected. Early in my freelancing career, I didn't recognize this need. As a result, my work on Smallville and Red Dragon Inn didn't display the potential I've been able to show in later projects. It wasn't until I worked on Marvel Heroic Roleplaying Game: Annihilation that I found my muse. 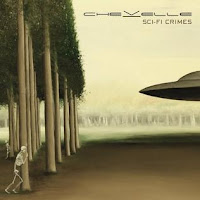 Annihilation was a big deal for me. Finally, I was not only doing professional work, but it was for one of the pillars of my geekdom. I was working on a project that had the name Marvel on it. Even more importantly, Nova was (and still is) my favorite superhero, and Annihilation was his vehicle, his moment to shine. I could not screw this up. I was more than a little intimidated by the project, and as my deadline was creeping up, I wasn't getting nearly as far as I should. So, I did what I have had to do when buckling down on a spreadsheet- I put on some music and let it pull me along. In this case, it was Chevelle's Sci-fi Crimes. A decent album and it drew me into Annihilation's major beats and space battles perfectly. This was a game-changer for me. Fast forward a few years, and this is a more formal part of my process. If I'm writing for a project that in any way evokes theme, or depth of character, I've spent time to curate a playlist long before I've put a single word down. For Wayfinder when I wrote The Boomrock Run, I made a list full of Fugazi, the Rollins Band, KMFDM, and started it all off with Faith No More's Surprise, You're Dead. Cosa Nostra, my Cortex Prime setting set during the time of Lucky Luciano and Meyer Lansky found a soundtrack influenced by the music I listened to at the time my grandfather would tell me those stories- Billy Joel, Elton John, the Clash. Starfinder Society: Illegal Shipment drew inspiration from late 80's sci-fi/action movie soundtracks like Aliens, Predator, Terminator, and liberal seasoning of the Mandalorian. While my newest work was entirely drawn from Pink Floyd songs to fill my mind with the haunting mystery and drama that music can inspire. And so on, and so forth.

I don't know if I'm in the minority of people that do this, but I'm curious to see what the next soundtrack will be.