The impending doom that is Gencon always gets me working hard to finish projects in time for the con, and this year is no different. I hate to admit it, but work on Saturday Morning Games projects tends to take a backseat to freelance work, but not having a hard deadline for my own projects will do that.

Earlier this year, I noticed the fifth or sixth game project on Kickstarter that used the Bleeding Cowboys font for its logo- just like Dime Stories. It was enough to make me change the logo to something more original- so away to Illustrator and Photoshop I went to push out something that felt right. It took me a bit, but in the end I created something that really works and I'd be proud to put on every Dime Stories product from now on. 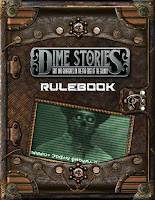 The timing for this change could not have been better. After working with a few printers on costs and formatting, it was made apparent that the landscape format I used for the main rulebook would likely end up prohibitively expensive and for some POD printers, impossible. To be fair, I'd already been reconsidering some of the art I had in the game- sure it was all free up to this point, but I wanted more. I've been in talks with some game artists I grew up loving, so that's already coming along. And changing to a portrait 5.5 x 8.5 format would end up far less expensive over all. So a new cover was also required. I wanted something that would be easily modified for different books, but would retain a consistent style throughout the line. This was far easier to accomplish with the new logo, so bonus! 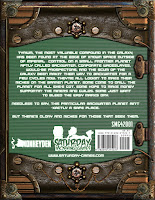 And before you ask, no, the rulebook has not made it to print yet. While I am waiting for the new art, it will remain the same PDF only book as before. I expect to have a print run ready by the holidays.

All these changes made me reconsider some of the original products I had intended and more importantly, how I used them in practice.

Anyone that got to play last year's Gencon adventure, Among the Living, would have noticed that the Ten Cent Tale incorporated two sets of cards for play. The first (and I doubt I'm giving much away here) is the zombies and other NPCs that the player characters run into around every corner. These are randomly drawn, so I had simple cards printed out for my use only. The second deck was Infection Cards, since every attack from a zombie had a chance of spreading their disease to the player characters. This year, I wanted to use some more professional looking cards for the adventure, and I'd already been working on some Dime Stories cards with Drive Thru Cards (see Promotions), so it made sense to keep going. Once I'd reworked the 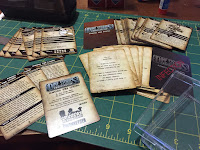 NPC cards with more of the free art I'd originally used for the rulebook, I continued on and made a card for each player character, and finally six cards to tell the adventure itself. This was an entirely new format for the module, and I love it. As long as the module clocks in under 70 cards, Drivethrucards.com can even provide a nice plastic case for a dollar. If the proofs were halfway decent, I'd make it available to the public, if not I just end up with fancier cards for personal use at Gencon. 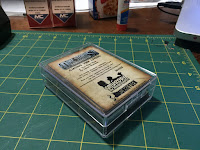 They came out spectacular. I really like this format and it makes a good and different product for our modules. Among the Living has the most use of cards for our current crop of Ten Cent Tales, and it ended up 70 cards exactly, so the cards fit in plastic case perfectly. As a result, today I hit the publish button and Among the Living will be the first Ten Cent Tale available to the public. By Gencon I will have the Potter Creek Massacre also in card for use at the convention, but our previous adventures probably won't be available until after Gencon (I'll update you if this changes).

I have ten adventures planned leading up to the Grand Imperial Civil War (Oh, didn't know we are doing a civil war in Dime Stories? Yep), and ten during/after. Each Ten Cent Tale will be available on Drive Thru Cards and I'll do my best to make them fit in the convenient plastic boxes. Pre Grand Imperial Civil War adventures will have the brown leather backing designs while later Ten Cent Tales will have different backing. Soon after Gencon we will have Among The Living, Easy Money (Jeph Lewis' Ten Cent Tale from the main rulebook), The Village at La Naranja Mesa by Geoff Bottone, and The Silent Silo Run by Jeph Lewis all done in this format. While The Potter Creek Massacre and My Dearest Clara will both be ready, I plan on holding off on publishing them until early next year since they have been written specifically for this Gencon.

I know what you're thinking: "Won't cards be a little small for maps?" You'd be absolutely correct. Instead, I will be providing free maps on Drive Thru RPG for free. My plan is two map packs- one pre and one during the civil war. As each adventure is published, the files for the map packs will be updated at no extra cost.

Finally, I decided to start a new small PDF line for Dime Stories. As I was working on the Gencon promotion, I wanted to write a bit more about the character involved- General Cassar. For the most part, Cassar is General Custer. With very little retooling, he fit perfectly in the Dime Stories universe. This meant a short five or six page PDF that I would put on Drive Thru RPG. IT would not only provide rules to make Cassar usable as an NPC in Dime Stories, but it would also give a character history and rules for the Imperial Units that follow him.

But why stop there? This is a great way to flesh out the universe, so I'm going to have to make more. In all likelihood, the villainous La Esqueleta will be next, followed by some more characters based on personalities form the wild west. The line will be called Dime Stories: Wanted. I hope you will all enjoy it.

I keep talking about how this promotion pushed me to work on other products, so here it is:

With a name like Saturday Morning Games, it stands to reason that our favorite events to run at Gencon would be the ones we run on Saturday Morning. This is usually the new game we're showing off, or a brand new adventure for one of our existing games. And each year I've provided individual sized cereal boxes and milk for all of our players.

This year I wanted to provide something special to our Saturday morning players. Last year, General Cassar showed his ugly, scaly head in adventure after adventure, this year our players will get to leave with him in miniature form. And true to form, it will be in a format befitting Saturday Morning Games. 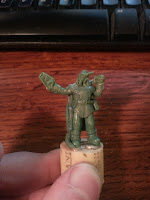 I hooked up with Bryan Steele while he was still at Cool Mini or Not. He hired me to do reviews for Ravage Magazine, and when I needed a sculptor to bring General Cassar to life, he was more than happy to help. After a couple pictures and descriptions, Bryan sculpted a great 28mm scale miniature and introduced me to people that could take the green and mass produce it.

Emily at On the Lamb Games is one of the nicest people in the industry that I've had the pleasure of meeting. She patiently walked me through every step of taking the green to full production and my order for General Cassar miniatures were on their way to my home in no time at all. 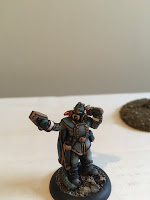 I had barely received my General Cassar miniatures when I instantly dove into painting the figure, choosing the colors that would not only grace him, but all the Imperial troops in the upcoming war. The light grey I chose worked on many levels- especially when I began to nickname Imperial forces as Greyscales in my mind. Trust me, this is terribly funny.

Blackwater Gulch from Gangfight Games had been one of my favorite miniatures games since I'd been able to take part in their Kickstarter back in 2012. So naturally, if I was going to make a western style miniature, I'd want to be able to play it in that game. Thankfully, the guys at Gangfight Games were gracious enough to let me make a card for Cassar compatible with their awesome game.

This is where Drive Thru Cards came in. With cards for Cassar in Blackwater Gulch on the way, I thought it would make sense to (as in: I would be an idiot not to) include a card to use the character in Dime Stories. This card became the format for all the cards to follow and was where the idea for the Wanted line began.

Now all I needed was the right presentation. No matter what people try to tell you, if you are trying to get something to the public, presentation is always more important than content. Oh sure, people try to tell you not to but a book by its cover, but that's only because most people will, every time. I could have just handed out free blister packs with the miniature inside to my players on Saturday, but where would the charm be in that? That is piss poor advertising and honestly, not worth the attempt. Instead, my fantastic wife made the best recommendation- cereal. Make the miniature the prize in the bottom of a cereal box! 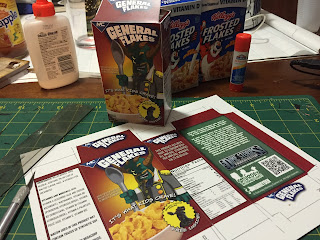 Despite the headache of finding a company to make individual cereal boxes cheaply- most companies won't touch it for less than 1500 units- I was able to get a local printer, Peerless Printing, to push them out for me with time to spare.

So on Saturday, players for our 3 events (Dime Stories: The Potter Creek Massacre, Dime Stories:  Assault on Fort Ss'zithriss or To My Dearest Clara, and Velour & Go-go Boots: The Vatizar Incident) will get a box of General Flakes with a prize inside.