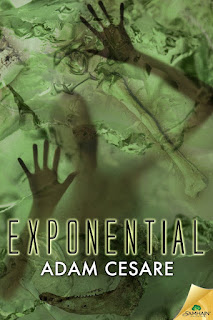 That is not the case with this book.

Imagine a world where a nightmare creature born of Miyazaki's mind blending a classic D&D Gelatinous Cube with a little bit of Katamari Damacy to make a perfect cinematic horror monster. Adam Cesare's monster, Felix, brings back memories of the thing in the lake from Creepshow 2 (aka Stephen King's the Raft), and I found myself wanting to hear the characters exclaim "I beat you!" before their imminent demise.

But Felix is not what made me love this book.

In any monster book or film, the monster can be creepy, scary, and downright disgusting- but it's only as good as the eyes that tell its tale. Here Cesare shines. Exponential is a series of small vignettes, each highlighting an individual character. While the protagonists earn multiple chapters to tell their tale and eventual meeting at Rose's Tavern- where the book finds its climax, victim after victim get to be fully fleshed out characters as their lives and potential are snuffed out in horribly messy ways by our not-so-beloved Felix. This made the book for me. Anyone can tell the tale of survivors holing up in a southwestern bar hiding or combating a horrible menace. Plenty of crappy movies have used that plot to hide small budgets and unimagined authors. But Cesare doesn't have that problem. He embraces every character, no matter how small, with the mantra that everyone has a story to tell.

Now, why horror usually fails with me because I let my disbelief color my ability to feel fear from books and movies. Yet there is one aspect of horror and disaster fiction that I love- rising dread. I love that feeling when characters go about their own lives unaware of the increasing danger waiting to find them. And like the first Fall about to embrace Pern's shores, Exponential has tons of characters waiting to die, unaware of how short their life really is or the troubles about to find them.

But in my desire to keep this short, and not ruin the whole story with spoilers, I'm just going to go right to the rating.


Exponential is the third book I've read by Cesare. The first, Tribesman, was an enjoyable romp with cannibals attacking a movie crew reminiscent of old Italian cannibal movies. It was pretty much how I always felt King Kong should have ended, without the big, building climbing ape. It was good, and for a quick read, it scratched an itch.

Video Night hit me a lot closer to home. It brought back old days of video rentals, Nintendo, and classic horror fare. It was a nostalgia filled blast, but didn't transcend the genre for me. I enjoyed it enough to add it to my "READ ME AGAIN" pile, but not enough to put word to screen to laud its accomplishments.

Exponential took me places I didn't expect. I found myself rooting for characters I normally would have hated enough to cheer on the monster. It kept me engaged and drove me to eat up each word despite not particularly liking the reader on the audiobook version. On its own merits, Exponential earns a fitting 75 Monstrous  rating.

The audiobook version has issues. I'm particular in how I listen to a book. Originally, there were problems with the audiobook missing a couple chapters at the end, but that didn't flavor my review. Really, it's the reader. While competent, his voice and delivery grated on me. His throaty voice and the way he chewed on the words seemed incongruous to the majority of the characters he was describing- and don't get me started on his accents. It's enough to lower the grade for that version three levels. 32 Remarkable. Would I still buy the audio version? Yeah, sure. But unlike books like World War Z that were improved by their audio variant, Exponential suffers from it. Any day of the week, this book needs to be enjoyed in print or on screen rather than listened to.

Full disclosure: Adam Cesare is my cousin. However, he doesn't need to be my relation to get this review. Exponential is the third book of his that I've read and it is my favorite so far. The book earned a review all on its own and Adam's personal style of writing has made me embrace the genre more than I had reading heroes like King and Koontz. And if I wasn't related to Cesare, I'd say the same thing. Every single word.