Slightly entertained by making a quick, fun simple rules light game like last week's Kingdom Come for Ryan Macklin's Game Design Challenge, and inspired by Daniel Solis' (creator of one of my favorite games, the award winning Happy Birthday Robot) Business Card Fighting Game, Trade Showdown, I decided I wanted to do another quick and dirty game (Who am I kidding, slightly entertained? That was totally too much fun and I got a lot of great responses from it.. so thank you all!). This one would serve a couple functions.

Firstly, it would allow me to to get this mini-game bug out of my system. Two games in two weeks is not bad in any book, but I really should be working on typing out the rules for Superhuman (I still love you Superhuman!). But it's awfully good fun saying, "I have an idea!" and a few hours later.. it's pretty much done.

And B, I needed to update my Business Card. Oh, I have one for Monkeyden Productions, and fairly soon I will be carrying a card when I am representing Slugfest Games as their Retail Liaison, but I wanted to have a card that is just me: Joseph Blomquist, Freelance Writer and Game Designer. Not Joseph Blomquist, president of some small press game company or retail rep for another small press company with decent word of mouth.  To that end, I thought it would be cool to have a fully formed and simple to play game on the back of my card that could be played with little more than a few business cards and a pen. And considering I am most likely to give my card out at a convention, players are likely to have tons of both. So this game will show up on the back of my new business card.

Anyway, here it is: Convention Espionage!... or rather:

I'm going to be lazy. Rather than type out the rules for the game again, I'm just going to provide a slightly blown up version of the rules for the game as an image. Click on the image to blow it up. Admittedly, I had to use a pretty small font to make it fit on a standard 2 inch by 3.5 inch business card, but I can still read all the rules on a regular card so I think it's a keeper. 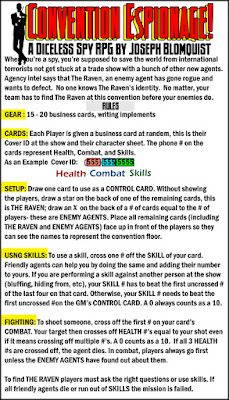 Rules-wise, I went very simplistic. Pretty much nonexistent character creation and dice-less. The idea is to make the players able to use just what they would have on hand when getting my card and not requiring too much thought or record keeping. This whole concept is nothing new, really. After checking out RPG.Net, I found that the always awesome James Wallis did something similar (and admittedly, his game might be a bit better than mine- no surprise there, like I said, James Wallis is awesome) and apparently James Ernest from Cheapass Games used to do this as well. Good to see I'm in good company.

Now if I can just figure out what the hell to put on the front of the card.

Update: after checking out Jonathan's cool hack, I decided to chop some words off. and Hey Look! Bigger Font! More readable! WIN!