Because Gencon happened and I got a bit distracted in the days following, here is the continuation of my adventures in RPGaDay:

14th- Best Convention Purchase
This is a tough one since I've been to nearly every Gencon and Origins in the last decade and several Gencons and I-Cons (Long Island convention at my alma matter) in the years before. A lot of games have made it into my stash thanks to these, so it's tough to narrow down to a "best." Instead, I'll have to mention two, specifically. 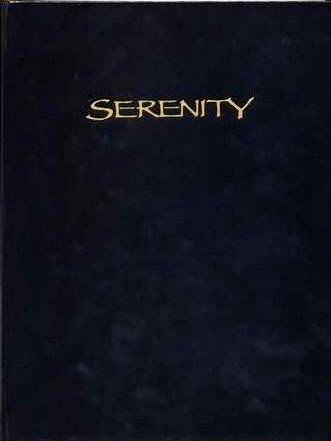 The First is going to be the Serenity Roleplaying Game. Not because it is a phenomenal game (It's not bad, but not great), not because it's Firefly/Serenity (most of my friends already know of my Firefly obsession), but because my interest in getting the limited edition version of this game led to the jump-start of my freelance career.

While working at the Slugfest Games booth at Gencon, I made it over to the Margaret Weis booth to purchase one of the limited edition copies of Serenity. In the process, I got to meet the writers and staff of MWP at the time- Jamie Chambers, Cam Banks, and even Margaret Weis herself. After a hurried presentation, I gave the kids at MWP a copy of my in-progress work on Superhuman. From what I understand, it was that presentation that led Cam to contact me to work on Smallville.

For the second, I'm going to have to break from the RPG specifics and move into board game/RPG hybrid. Cutthroat Caverns by Smirk and Dagger. Cutthroat Caverns is a competitive dungeon delve game. You need your allies to complete the adventure, but you want their share of the treasure. While it's only made it to my table a couple times, it is still pure genius.

15th- Favorite Convention Game
Again, the same goes as the above question. Too many conventions, too many games. Most of the games I played at conventions were either board game demos I ran for Slugfest like Red Dragon Inn and En Garde, or games I wrote myself *COUGH* Dime Stories *COUGH*. But, I did get to play a bunch of games not written by me. While I love Pathfinder, my PFS experiences at convention aren't all that different to my home experiences. Playing both Critical! Go Westerly and Gaesa were great experiences, but I can't say I would put them as my favorite.

That right goes to my pal Geoff Bottone's new RPG, Velour & Go-go Boots. V&GGB is only a temporary name for the game that started as a snarky take on Star Trek: The Original Series, but instead evolved into a rich and hearty Star Trek experience in Geoff's deft hands. Unlike actual Star Trek games, my companion Brian and I weren't bogged down by the rules system. Instead we could dive headlong into the type of moral quandaries the old Star Trek series used to emphasize. Even if Brian and I were Geoff's only players at that sitting, it was the best game I played this past Gencon. 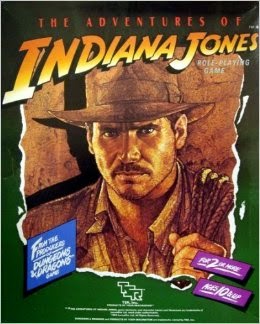 This is an easy one. In the early eighties, TSR had the rights to Indiana Jones and released the short-lived RPG, The Adventures of Indiana Jones Roleplaying Game. Soon after, Lucasfilm took the rights back and TSR had to pulp any remaining stock.

To commemorate the end of the license, TSR employees in the UK made a small pyramid shaped trophy from some of the remains. Based on that trophy design, the Diana Jones award has been awarded since 2000 every Gencon for excellence in game design. I'd love to have copies of the former if only because my childhood best friend, Chris, and I were stalwart Indiana Jones fans. But more than anything else, I'd love to write something worthy of being awarded the latter version. While the Ennies are awesome, they can feel like a popularity contest. The Diana Jones Awards are really what will make me feel like I've written something worthwhile.

17th- Funniest Game I've Played
Okay, this is a tough call. I have, as seems to be the trend, two choices for this one. Crap... I have three.

First, My partners in the Saturday Morning Games Venture, Geoff and Jonathan wrote a great game called Critical! Go Westerly. It was written for comedic value and when I read it, I hear the narrator from Hitchhiker's Guide in my head. That was intentional.

Second, Paranoia. Anyone that has ever played this game knows there is little that is as hilarious as nonstop clonedeath (TM)- especially if your GM is particularly creative- mine was.

The third one is The Extraordinary Adventures of Baron Munchausen. 'Nuff said.

I'm not deciding. Buy them all and decide for yourself.

18th- Favorite Game System
Mine is probably not a popular answer.

My favorite is the SAGA System from TSR used in their 90's iterations of Dragonlance and Marvel Super Heroes (Before you ask, this is NOT the same as Star Wars SAGA which is just D20 with a facelift). Instead of dice, SAGA used cards (called Fate Cards) to decide actions. While your hand was random, you decided how much effort your character put into an action by how high of a card number you played. It also used card suits to synergize with character attributes and descriptors on the cards for flavor. This was a great idea if a little before its time. The gaming community wasn't really ready for this concept as Magic: the Gathering was still fairly new and the concept of deck-building games hadn't come into light yet.

It sounds like it should be cumbersome, but it really isn't. At one point, I had a table of twelve players in Dragonlance using three sets of Fate Cards playing simultaneously and GMming felt effortless.

19th- Favorite Published Adventure
This could go a bunch of ways. In my youth, I loved a bunch of adventures- from Shadowrun romps like Bottled Demon and Harlequin, to my favorite D&D modules like Ravenloft, Isle of Dread, and the first Spelljammer module: Wildspace. These days, I love some of the brilliance I see from Paizo. Most of their adventure paths are perfect, especially the Rise of the Runelords adventure path and the Skull & Shackles path. The first is almost a gazetteer of Golarion, the second a wonderful pirate romp.

But my favorite is a trilogy form the old Marvel Super Heroes line. MT1, 2, and 3. Or by name: All this and World War II, The Weird, Weird West, and The Revenge of Kang. These adventure took modern superheroes through the history of the Marvel universe from WW2, the Wild West, through the creation of the X-men, Fantastic Four, and heroes like the Hulk and Spider-man- all in an effort to thwart the machinations of Kang the Conqueror. I liked it so much that years later, I tailored a Mutants and Masterminds adventure in the same vain. 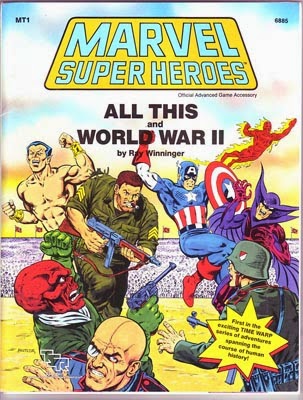 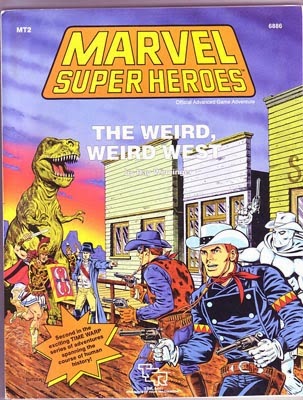 20th- Will Still Play in 20 Years Time...
It's tough to say what I'll still be playing in twenty years. In all likelihood, it's less about the game than the world. Whatever it's incarnation, I'll likely be playing some version of Star Wars (hopefully my current favorite- the Fantasy Flight Star Wars RPG or whatever follows that), Marvel Super Heroes (preferably SAGA or Marvel Heroic), and Dungeons & Dragons (or Pathfinder as it were). In my own campaigns, I've seen my game groups keep the ties of a campaign going despite new editions, publishers, and members to our game groups, so nothing would really surprise me.