Reverb Gamers is a project from Atlas Games that includes 31 question prompts to kick off gaming in 2012. It gives a structure to gaming conversations and asks all the right questions. My plan is to do at least 2 questions a week starting here. Also, check out @ReverbGamers on twitter or check it out on Facebook to keep the conversation going.
In an attempt to catch up a bit, I'm gonna start doing these in bulk.


REVERB GAMERS 2012, #3: What kind of gamer are you? Rules Lawyer, Munchkin/Power Gamer, Lurker, Storyteller/Method Actor, or something else? (Search "types of gamer" for more ideas!) How does this affect the kinds of games you play? For example, maybe you prefer crunchy rules-heavy systems to more theatrical rules-light ones.

After doing some research, I decided to pull my Gamer classifications from Robin's Laws of Good Game Mastering, by Robin D. Laws (published by Steve Jackson Games, 2001). His classifications are: The Power Gamer, The Butt-Kicker, The Tactician, The Specialist, The Method Actor, The Storyteller, and The Casual Gamer.

I found that two of these Gamer Types seem to apply to me after reading through the details. Depending on my role as player or gamemaster, I am equal parts The Specialist and The Storyteller.

The Specialist: As a player, I tend to play character types that I enjoy to watch. Almost always, i play the charismatic rogue, someone that is as quick with his wit and smile as he is with his rapier and pickpocketing. I can be kind of mouthy and love more dexterous characters. 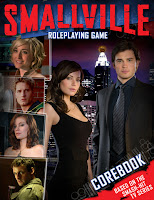 The Storyteller: Almost always, if you play in one of my games, story and character development far outclasses rules time and again. If i have to bend or break a rule entirely because it suits the story, so be it. If your character does something amazing, I may not even call for a role just because it suits the story. And if you want a glorious death that hits a dramatic beat, I'm all ears. It's ironic then that when we were writing the Smallville RPG, I was the one person on the team that was the most reluctant to accept the direction we were going. I was looking for a crunchier method of superhero roleplay, and couldn't wrap my noggin around the choices we were making. In the end, however, I was 100% wrong and Smallville was by far a better game and more fulfilling experience when it was completed than a crunchier game could have been.

Now does this affect my choices in game? Not really, despite my preferences, I will play all kinds of games. Of course I love FATE and Cortex +, but that doesn't mean I don't love Pathfinder or even more involved games like Pendragon.

REVERB GAMERS 2012, #4: Are you a "closet gamer?" Have you ever hidden the fact that you're a gamer from your co-workers, friends, family, or significant other? Why or why not? How did they react if they found out?

In Junior High and High School, it mattered WAY TOO MUCH to me what other people thought. I mean, sure I did things I shouldn't have. I wasn't a bad kid, but I certainly wasn't a good kid either. But other than my closest friends, Chris, Ian, and Melissa; nobody knew I gamed. And not just a game or two, I was deep into Dungeons and Dragons, Marvel, Shadowrun, and Warhammer 40,000 on top of the games that Chris and I wrote like The Sword & the Hand and Mystical Magic.

But I had something of an image to maintain and didn't know how freeing it would have been to wear my Geekery on my sleeve. It was my loss, however, as the wisdom of age has taught me to accept who I am rather than some image of who I should be. Because who was I hiding from? Prying eyes of my classmates that didn't really care?  Or myself?

REVERB GAMERS 2012, #5: Have you ever introduced a child to gaming, or played a game with a young person? How is gaming with kids different than gaming with adults?

Actually, yes.  Since returning to Cincinnati, my friends from high school have returned to my life and my gaming table. All of them have kids now, but Melissa's daughter is the oldest of them. Every now and then, when Melissa's ex-husband doesn't have her daughter for the weekend, she comes over to my place while we game. Sometimes, Melissa's daughter joins in, rolling dice for her mother or conferring as to what they should do next, and has been present for Star Wars games as well as some Pathfinder.

But every now and then, we'll bust out a board game or two and she joins in right away. I think my favorite time playing with my surrogate niece was a game of Ren Fair that we played after a comic convention. She jumped in feet first and her excitement at playing was a welcome addition.

Is it different? I suppose so, but only in the parts that she doesn't know all the rules to a certain RPG or that I try to watch my language more when she's around ( I fail, but I still try). But these are things easily remedied, and she is more than welcome at my table anytime.

REVERB GAMERS 2012, #6: Describe your all-time favorite character to play. What was it about him/her/it that you enjoyed so much?

Heh. My favorite character? That would have to be Fester. In my buddy Luc's 3.5 game, Fester was a goblin rogue. Well, that was what his stat sheet said, but Fester hated letting the other party members see him work on traps or steal. He wasn't hired to be the rogue, Fester was the cook.

Famous (or perhaps Notorious) for being the genius chef behind a local inn called The Elven Lady (though Fester called it The Goblin's Lady), the party hired him to keep them fed. They were a bit daunted, however, as his kills became some of their odd, but delectable, meals. Scarier still when they realized the pair of daggers he used in combat were actually the pair of knives he used to so deftly chop up their meals when cooking. He would never clean them off, either, deciding he proffered to keep the "spices" on them.

But what made him fun was that if there was trouble to be had, he was always neck deep and made a great antagonist, deciding it was hilarious to give each of the other PC's derogatory nicknames and pick on them mercilessly for even perceived failings.

Sigh. He was such a dick. Good times. 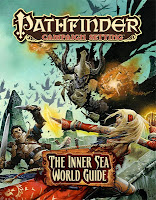 For some, I try to find something humorous (my goblin Fester or Kaek -pronounced Cake- my Urseminite) or historical (Sinjin, my Keleshite Urban Ranger).

REVERB GAMERS 2012, #8: What's the one gaming accessory (lucky dice, soundtrack, etc.) you just can't do without? Why?

While I don't have lucky dice or the like, there is one thing I love. Visual representation. This comes in several forms depending on the game.

For games that use them, Miniatures. Over the years, I've proven to be a fairly good minis painter, even winning Best Painted at a tournament or five. And so if a game uses a board ever, you are dmaned skippy that I will be painting minis. And not just for my character. I don't expect other people to paint as well as I do, especially since very few other gamers I play with have put brush to mini, so I'm more than happy to remedy that situation by painting their PCs for them.

For superhero games, I go a different route. I've been drawing superhero characters for as long as I remember, and unless someone is a better artist or wants to do it themselves, I draw all superhero PCs for my group in games like Mutants and Masterminds and Icons.

Finally, for some games, I will make photo cards of PCs (and important NPCs if I'm Gamemaster) from pictures of the characters in the adventure I am running, or more likely, from celebrities the other players pick for their characters.

REVERB GAMERS 2012, #9: Have you ever played a character of the opposite sex. Why or why not? If yes, how did the other players react?

I have played a female character. In the late nineties, I played a Night One Assassin named Bloo in a Shadowrun Game. And I did this simply because the character made more sense as a woman. And while I've played female characters here and there in one shots, Bloo was my only long standing female character. For the most part, my friends didn't react one way or the other, but it occurred to me back then why I don't like to play women.

I am not a woman, and while I might like the occasional so-called chick flick, or actually care and empathize when someone comes to me with a problem rather than always taking the logical route; that does not mean I have a clue what goes on in a woman's head any better than a woman will understand the nuances of my own mind. That's not to say that women are inhuman or deformed in some way. It simply means that I do not know what it is like to be a woman, so I could not accurately portray a woman. I find, instead, cross-gender characters generally end up lumped into stereotypes, and that does more harm than good.

REVERB GAMERS 2012, #10: Have you ever played a character originally from a book/TV/movie? How did the character change from the original as you played? If not, who would you most like to
play?

In one of the many Shadowrun campaigns I got to run and/or play in the '90s, There was one time that the group needed a good rigger. I'd already played a droid rigger for years in my notorious paraplegic character, Forge, so I was the natural choice. That and after playing that game for nearly ten years, I'd played every type of character, so I was willing to go with whatever the group needed. Good getaway drivers are harder to build than most riggers because you have to not only build the character, but his getaway car is almost a character in itself. And I could have found inspiration in a few million characters from Bullitt to Speed Racer. Instead, I chose to base my character on a little known anime called Riding Bean. Bean is a mean sonuvabitch, but no character until the Transporter movies has been nearly as much of a badass behind the wheel as that character.

So my rigger, Bean, was every bit the character that inspired him and is remembered for one incident. Another PC, a lowlife scum street samurai called Rook, was getting on Bean's nerves and our GM was cool with PC friction. So, when Rook tried to jack Bean's car, Bean drew his smartgun and said: "Get out of my car or I'll shoot you in the leg."

Fearing for his life, Rook got out of the car, and Bean immediately shot him in the foot.

Rook freaked out complaining that he said he wouldn't shoot, but Bean just shrugged. "It wasn't the leg."