Reverb Gamers is a project from Atlas Games that includes 31 question prompts to kick off gaming in 2012. It gives a structure to gaming conversations and asks all the right questions. My plan is to do at least 2 questions a week starting here. Also, check out @ReverbGamers on twitter or check it out on Facebook to keep the conversation going.
In an attempt to catch up a bit, I'm gonna be doing these in bulk.

REVERB GAMERS 2012, #11: Have you ever played a character that was morally gray, or actually evil? Why or why not? If yes, did you enjoy it?

That's a bit of a weighted question. I played Shadowrun and White Wolf games quite a bit in the 90's so evil/morally grey.. it's a bit of a given. Shadowrunners tend to be thieves, thugs, and corporate terrorists. They are driven by the almighty nuyen (or dollar for the unawakened) and can always be bought. In white wolf games, you are literally that thing that goes bump in the night. No one is a good guy- at least until the Hunter game came out. So both games really force you into that role.

However, in games where the choice was more mine, from Dungeons and Dragons to Teenage Mutant Ninja Turtles, I generally tread on the side of the angels. Oh don't get me wrong, No one is pure and true so there was a bit of moral flexibility, but rarely would I cross over evil's threshold. It's not that I don't enjoy those types of characters, in fact in most stories, the villain is the more interesting character; it's just that I prefer the role of the hero. I'd rather be lauded than derided.

Maybe it's just me.

REVERB GAMERS 2012, #12: Do prefer collaborative or competitive games? What do you think that says about you? 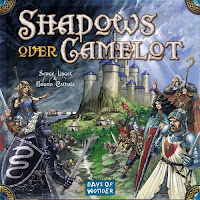 Collaborative. I like both types and enjoy the rush of crushing my opponent, but I prefer the feeling of achieving a goal alongside a friend or three. I'm sure it's more or less related to my enjoyment of the social aspects of gaming. But winning a game of Shadows Over Camelot with my friends or losing to the timer in Pandemic or to the Count in Castle Ravenloft is much more fun and brings us together more as a group than facing off in a game of Diplomacy or the like.

REVERB GAMERS 2012, #13: Who's the best GM/storyteller/party leader you've ever had? What made him/her so great?

This is a tough call because so many of the GM's I've played with have so many varied strengths. Some are more knowledgeable, some fall into their roles like they were born for them. It's a very subjective matter.

I'd probably go with one of my current GM's, Adam, as my favorite depending on the situation. When he is in his element (dark tales with political intrigue and things that go bump in the night), he is the bees knees. He uses voices and accents drawing on his acting past, and sets a scene very well. It's pretty impressive, but Adam's success really depend on the world and system. Like anyone, there are times when he's off, but it in no way makes him a bad GM.

REVERB GAMERS 2012, #14: What kinds of adventures do you enjoy most? Dungeon crawls,
mysteries, freeform roleplaying, or something else? What do you think that says about you?

I like variety in my games. I can enjoy dungeon delves, political maneuvering, a good puzzle or six, and even simple social roleplaying. But I can't enjoy just one of the aspects, I need more to flavor my games. I don't want to just roll dice, but I also don't want to never role dice. Maybe that makes me greedy. But I like to think of it as "well-rounded."

REVERB GAMERS 2012, #15: People often talk about the divide between what happens "in game"and "in real life." Do you maintain that divide in your own play, or do you tend to take what happens to your character personally? Why?

I'm sure I get a little sad when one of my characters bites it, but I don't take it personally. It's a game, not living and breathing, and while I might miss him when my fantastic thief gets caught with his hand in the wrong pocket, I can't fault the GM that takes his life. For the most part, it's dice and perhaps Desna or Olidimarra, or whoever is not with me. But tomorrow, I can make my next FAVORITE CHARACTER EVAR!

REVERB GAMERS 2012, #16: Who was the most memorable foe you've ever come up against in a game? How did you beat him/her/it? Or did you?

First, there was Molkoth, a tremere ancient that antagonized our characters in several games set in the old World of Darkness. When we were playing Vampire: The Masquerade, he was so old an powerful that there was no chance we could touch him. He left the Camarilla behind and had something of a cult following him. His cultists hunted both Camarilla and Sabbat vampires and burned them to ashes for their "impurity." He even burned my character's bar, Suspended in Dusk, to the ground while trying to start a war between Vampires and Werewolves in NYC. He succeeded at his intended task but was rumored to have died in the battle. Vampire ended soon after.

Later, we were playing a variant of Vampire called The Hunters Hunted. This thin paperback allowed us to play human vampire hunters with no special powers. My character, Jake, was a hunter back in the old west. When he rode alongside a local werewolf clan to hunt the local tremeres, the lead tremere (Molkoth) got rid of him with a spell that sent him 100 years in the future. In the 1990's Jake became a werewolf through a ceremony when he found his old werewolf friend was now leader of his clan. As a werewolf, Jake finally eviscerated Molkoth in the aforementioned battle of central park (the Storyteller was great at linking our adventures together like that), but never made it home.

The other was Dr. Phil. In a great Mutants and Masterminds game that we still tell stories about to this day called The Graveyard Shift, we found that the main baddy that was trying to take over the world through mind control and television was none other than the pop psychologist. We had to face the entirety of Freedom City's premiere supergroup while trying to get to him, but in the end we defeated him on live TV bringing a bit of fame to The Graveyard Shift.

REVERB GAMERS 2012, #17: What was the best reward you've ever gotten in a game? What made it so great? How much do you need tangible rewards (loot, leveling, etc.) to enjoy a game?

Years ago, while playing 2nd edition Dungeons and Dragons, my cavalier, Cray Rectrose, was rewarded with a fief for service to a king. This fief included a manor and lands around it. While it sounds like a simple duh- "OOO you got a castle...", what made it cool was that it changed the whole dynamic of the game. For one, the party had a cool home base and we had to staff the manor and explore all that was within Cray's lands. But also there was a wealth of adventuring that came to us as the local lord.. from political intrigue to invaders. It was fantastic.

I suppose leveling is always welcome, but I seriously enjoy those static level games like Mutants and Masterminds where rewards happen more in story than arbitrary numbers.

REVERB GAMERS 2012, #18: Have you ever "cheated" on a die roll/random chance outcome, or looked up a quest solution on a fan site? Why or why not? If yes, was it worth it?

As a GM? Absolutely. There have been campaigns where my dice rolls guaranteed TPK, but I usually try very hard to keep the characters alive so that it is more fun for all. Of course, last year when I actually had my first TPK it was the combination of good dice rolls and bad tactics that killed my players.  Long live the Will O' Wisp!

As a player, I don't fudge my rolls, but I suck at math. So, I would not be surprised if my successes are more incorrect than correct. As far as reading ahead, I like to be surprised, but as long as its within a theme... If there will be undead, i like to know that but I don't want to know specifics. I'd rather see them as i grind them to dust.

REVERB GAMERS 2012, #19: What's the weirdest character you've ever played? How did you end up with him/her/it? 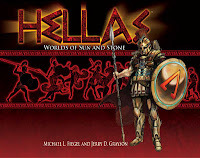 Hmm.. Played or Created? I once made a character that completely consisted of bees for a game called Hellas: Worlds of Sun and Stone, but never got to play him. Instead I played a tried and true human centurion.

For the life of me, the weirdest character I can think of actually playing is Fester, and that's just because he was a bit outside the box.