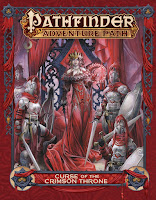 For the last few months, I've been running my fourth or fifth Pathfinder Adventure Path (I lose track after a while- especially after starting Rise of the Runelords three times), Curse of the Crimson Throne. I really enjoy the drama of Curse of the Crimson Throne. I like its bad guys, the personalities of the NPCs, and how everything is contained into one major city undergoing major political upheaval. I especially love how the theme feels like Masque of the Red Death and the depth of the antagonist's evil.

I'd say it is currently third in my list of favorite Adventure Paths behind Ironfang Invasion (because I was sorely missing a good forest campaign and Ironfang gives us that in the middle of a war of LoTR proportions) and Skull & Shackles (because pirates, duh).

But I find myself missing the days when I would create as a GM. Paizo has such good writing that it's made me lazy. I can expect their adventures to be so well written (if sometimes unbalanced) that prep becomes just reading the adventure ahead of time. So, I really wanted to create something new.

Does that mean I want to write an Adventure Path?

Unless I get lucky enough to end up in the Paizo bullpen at some point, I've got enough on my plate (shameless plugs follow) with Dime Stories, Superhuman RPG, my Cosa Nostra supplement for the upcoming Cortex Prime RPG, and my own Pathfinder fantasy/western campaign book, Boomtown (Currently in preliminary planning stages).

Instead, I'd like to use what is already there in modules and third party materials and tap my creative juices to string them together in a coherent storyline (adding my own flourishes and side quests along the way). There's a plethora of great material out there that Paizo published in the dark days of 3.5 that most players these days have never seen (like the Falcon's Hollow storylines) that would make a great starting point and takes place in Golarion.

So let's start with the helicopter view:

Pathfinder Outcasts starts with the players already familiar with each other. They are pariahs and monsters, cast out of their various homelands and on the run for some reason or another. The only people they can trust and rely on are each other. Already, this is different than the normal hometown hero story, these are the people the hometown hero is hired to run out of town. Not necessarily evil, just unwelcome.

Players are encouraged to build deeply flawed characters full of story, hardship, and spirit. They could be of nearly any class, but should be monstrous, morally grey, crazy, untrustworthy, iconoclast, unconventionally devout, or just somehow different than a normal PC (the campaign traits will help flesh this out).

The PCs start out already on the run, having crossed the Cheliax/Andoran border in hopes for a place they could live out their years in relative peace. While leaps and bounds better than Cheliax, the players find that Andoran is hardly welcoming as they pass through Arthell forest in hopes that the oft-mentioned Falcon's Hollow will prove to be a respite.

One of their few allies will mention a place much more egalitarian than Falcon's Hollow where our group might find a home: a small town in the River Kingdoms called Hordenheim. Problem is, they'll have to go through the war-torn Galt to get there- and unlike Andoran, galtans aren't exactly welcoming to outsiders.

So far this mini AP has two major arcs.The first is a search for a home which has the PCs trying to make a home for themselves in southwest Andoran to very limited success. This will use the modules Into the Haunted Forest, Hollow's Last Hope, Crown of the Kobold King.

Galt will act as a bridge between arcs with Flight of the Red Raven and Revenge of the Kobold King.

The second act brings them to Hordenheim where they begin to feel more at home. This will primarily follow Colin Stricklin's fantastic Adventure a Week modules in the city of Hordenheim.

All that brings the PCs to level 9 or so. That's where I fill in. Early in the series, they are introduced to the story of a druid king of ages past called Navren. They discovered some magic items of his that act in concert and have been scaling with the PCs as the campaign dragged on. Are they secretly the key to a greater darkness? Will our heroes become the beloved heroes they had always hoped to become?

Primarily I'm playing with the theme of family in a very X-men way. X-men always shined at showing those that society cast out could form true familial bonds by standing together to protect a world that hates them. That's the core theme here. But each arc should have it's own feel as well.

The first arc is a little bit Frankenstein and a little bit Willow. Early on, it becomes obvious that the PCs are the only competent adventurers for the jobs at hand, but they are still ignored, despised, or even chased out of town with fire and pitchforks. Despite the heavy theme,the execution will be a bit tongue-in-cheek with how the villains and other NPCs act (especially with the Kobold King as the early primary recurring villain). This is intentional so that the second arc isn't as jarring.

Hordenheim becoming home is very different. No longer on the run, we can abandon the Frankenstein feel for a more comedy/action feel in a Die Hard vain. This whole arc is more about becoming a part of their new society and should feel a bit like Edward Scissorhands or The Burbs. In fact, let's make that easier:

Every Adventure Path introduces a bunch of special rules to make it stand out. Outcasts will be no different.

First, I plan to lift the relationship map from Cortex. Not only will this help to establish the interactions between the PCs, but it will allow each pair of players to agree on a teamwork feat they can use together as if both possessed the feat (think of Colossus and Wolverine with the Fastball Special). Every four levels, the players can agree to change their character's views on each other to add new tactics and feat to their partnering.

Second, the trope of their time in Andoran and Galt will be that they are being run out of town. So I'll be sightly modifying the Pathfinder chase rules from the Gamemastery Guide with serious story implications if the PCs are caught.

This as well as scaling items of power that the PCs get REALLY early on and some other goodies.

I'll expand on all these rules in a later article.


That's it for now. Come back next week as I lay out the campaign traits in a mini Player's Guide.