Just a quick blurb since I have new work releasing today: 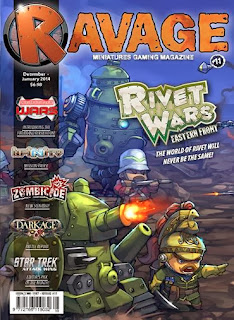 For those that aren't already aware, Cool Mini of Not's in-house magazine, Ravage deals with gaming as a whole. Reviews in it's beautifully laid out pages run the gamut from small, hard to find or lesser known games like Infinity and Knight Models' Arkham City to blockbusters like Zombicide (a favorite of the geek clan that gathers at my gaming table) and Malifaux. It has information about games from big companies like Games Workshop and Privateer Press and smaller companies like Flying Frog Games. However, Ravage's biggest draw for me is the cornucopia of extra content for games I love like Zombicide and MERCS to games I have always wanted to play like Sedition Wars.

In advance of the print release, Ravage Magazine always has an early digital release for iOS. Today, issue 11 released with a review of Urban Lasercraft terrain by yours truly. The first of many, I hope.

I won't go into the details of the review- there's a whole magazine for that (see above). I will say, I appreciate when I form a good, professional working relationship with a company. My first interaction with Bryan from Ravage Magazine/Cool Mini or Not was at Gencon 2006 while I was working with Slugfest Games and Bryan was still with Mongoose. I managed to talk up Superhuman to him (it was early in that game's development and I still thought I was going to go it alone), and Bryan got pretty excited about it, going so far as helping me to start talking to Mongoose about publishing through their Flaming Cobra label. We would talk every Gencon, and eventually Bryan found himself working for Cool Mini or Not. In his capacity at CMON, Bryan assisted with Kickstarter Projects (they really are pros at that) and worked the convention booths demoing games and promoting sales in a similar capacity to what I was doing with Slugfest. What I didn't realize was that he also ran the awesome Ravage Magazine- a magazine I'd already picked up for the extra MERCS, Zombicide, and X-wing scenarios.

On a whim, I sent him an email after reading an advert in issue 8 that said "Have something for Ravage?" Luckily, Bryan remembered me (though I might have sent some writing samples and my CV- I don't quite recall now) and gave me a chance. The review on page 58 of issue 11 is the result.

Like I said, you can find Ravage Magazine issue 11 in the iOS Newstand App and in print (Or click the image on the left). Now back to the writing mines for me. I have another review for Ravage due on January 4th and work to do to on Dime Stories books 2 and 3 before moving on to other new projects.

Till next time,
See you space cowboy...