Sorry I haven't updated in over a month, but I've been hard at work on two major projects. One is the teaser book for the Red Dragon Inn Adventure Series coming out at Origins this year (more on that after it is released) and the other has gotten me thinking about this column. First, I wasn't happy with Zorr, so I wanted to freshen him up rules-wise and make him look all prettified like the Watcher Characters in the Marvel Heroic Basic Game. And secondly, I'm not happy about the idea of not including Scenes to make the entire Man Called Nova series playable- so that's what I'm going to do. Not only will I give a synopsis, and datafiles but I will include relevant scenes for Watchers to use on their players.

Good thing I didn't get too far- heh.

So, here is how that last post SHOULD have looked: 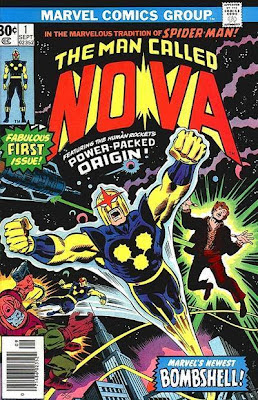 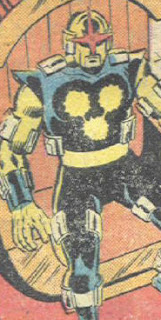 While Rich recovers in Hempstead Hospital, Rhomann Dey telepathically tells Rich of the centurion powers he has inherited, the horrors Zorr inflicted, and most importantly his duties as the new Nova Prime. Rich wakes up in a panic and gravimetric beams shoot our of his eyes blasting a hole in the hospital wall and nearly hitting his doctor. When Rich finally returns to school, his musings about what he had learned from Dey distract him from his class, but suddenly, he finds he knows the answer to a difficult math question right off the top of his head. This makes him reconsider the idea that Rhomann Dey was a dream, since math was always Rich's worst subject. Upon his return home, no longer denying the abilities bestowed upon him, Rich changes into the man called Nova!

Souring through the skies, Rich tries out the new powers he knows about: flight, strength, and stamina; when his helmet tunes into the police band and Rich decides it's time for a real test. That real test ends up being the  man Rhomman Dey charged Rich with defeating, Zorr! The new Nova manages to avoid most of Zorr's attacks, even landing a few hits of his own, but when Zorr decides to crush Nova with an apartment building, Rich decides to save an occupant opening him up for Zorr's attack. The arrival of Ginger, Mike and Donna-Lee distracts Rich, so he over-calculates his trajectory in avoiding Zorr's attack and collides with the damaged  apartment building. Despite the fact that it will open him up to another attack, Nova holds up the building's weight long enough for his friends to get away. When he returns to the fight, Nova sees Zorr disappear into thin air. Giving his life in the process, Rhomann Dey had used the last of his power to teleport Zorr to his starship, finally defeating him in his death. This leaves Rich alone to learn about his new powers and decide his own fate as Nova.

Action: Enter: Zorr the Conqueror
Zorr has decided to take refuge on Earth temporarily. Tormented by the destruction of his world by Galactus, Zorr has stopped conquering planets, instead he destroys them and siphons their energies into his orbiting space ship. The destruction of Xandar didn't fill his energy reserves with enough power to take on the Devourer of Worlds, so Earth is to be next. Fortunately, he was hounded by the Nova Prime, and though he believes Rhomann Dey to be dying, he's not taking any chances in attacking the planet from orbit. Instead he is "hiding" on the planet. But Zorr's idea of hiding is destroying everything in sight- in this case, Manhattan!

Zorr knows how to handle heroic defenders. If he is outnumbered or faced with an obvious threat, he will throw heroes into buildings or wreck the structures himself creating COLLAPSING BUILDINGS or ENDANGERED CIVILIANS complications in order to force the heroes to waste their time in saving civilians or stopping buildings from crashing to the ground. The moment they have their back turned, rather than run away, Zorr will use the chance to attack the heroes while their defenses are down.

The scene ends when Zorr or the heroes run off.

Options with Enter: Zorr the Conqueror 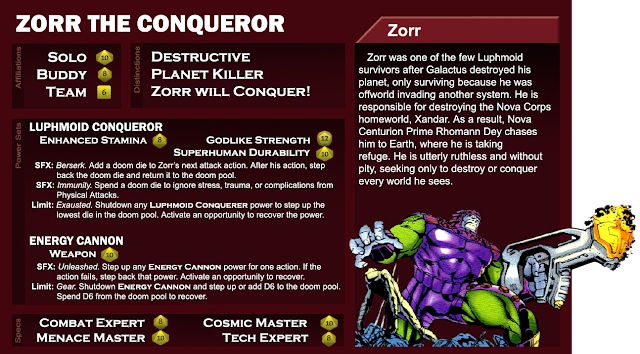 That's all folks- see you next time with The First Night of the Condor!
~Joe